It’s early when I turn into the well-rutted driveway that should lead me to the hoop house where Anne grows her tomatoes, but the sun is already fully involved in all the lush greens around the property. I can’t see her old, red and black pick-up truck to tell me I’m in the right place, but I can see the trailer that my husband helped Lois, who owns this property, acquire from one of our neighbors. And Anne grows her tomatoes on Lois’s property so I’m pretty certain I’m in the right place. For all the traveling I’ve done over the years, I remain directionally challenged so I often second-guess myself on things that seem familiar.

The dirt driveway leads past a field on my left, sheltered by a row of short trees, and straight on towards Lois’s house and the trailer. As I get closer to the end I notice I can follow the ruts around to the left and when I do, the large hoop house appears. I bump along, energized by being in the right place, and come to a stop directly in front of the hoop house. Outside the entrance there is a knee-high stack of produce boxes, labeled Organic Tomatoes, Grown by Blue Heron Farm; the morning pick. Anne told me she and her crew would be here, but I don’t see anyone around as I climb out of my vehicle and step toward the boxes. The tomatoes inside them are orbs of perfection; smooth skinned, baseball-sized spheres of cherry red with that dip at the top making them somewhat heart-like. Love apples. Pommes d’amour. 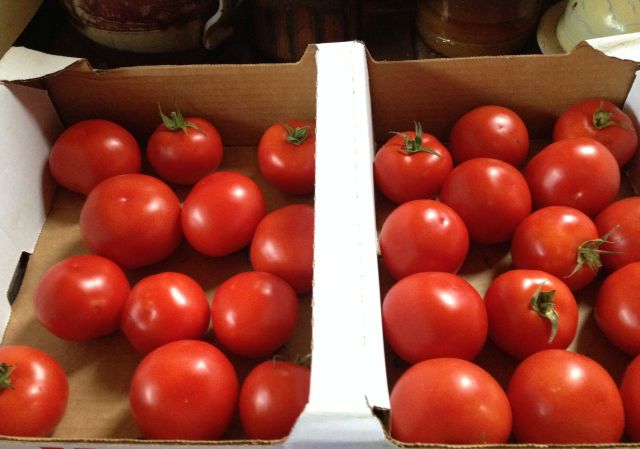 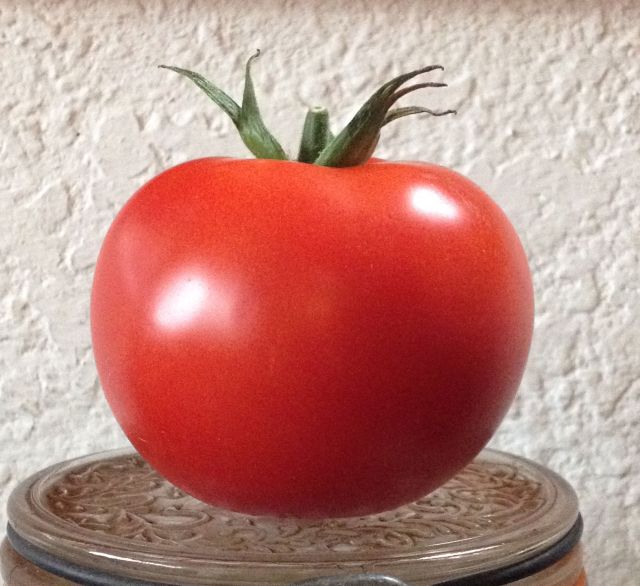 I wonder if I can take a box and pay Anne for it later but these might be for her CSA (Community Supported Agriculture) customers or for the Food Co-ops she supplies. So I step inside the hoop house, in search of a human being. What I find instead is an exquisite land of warm vines that intimates years of knowledge to me. Row upon tidy row of vines, both sides of a central walkway, painstakingly trained upright on orange twine between homegrown bamboo poles, so the tomatoes are exposed in heavy clusters to ripen naturally. I’m enchanted as I move down the center, my eyes widening at the number of tomatoes blushing to perfection. I tread gently, not wanting to disturb the tranquility of this long plastic dome, where the only noise comes from the fans whirring up by the peak, and I marvel at the experience that has gone into growing tomatoes to this degree of success. Especially in the sun deprived, rain rich, Upper Skagit Valley. We need the passion and bullheadedness of youth, I think to myself, because it encourages innovation and drives us forward; but we also need the perspective of our elders, who have tried and failed – then tried again. I’m sure Anne Schwartz has had her share of disappointments over the years as an organic farmer, but boy, she’s certainly proven that persistence pays off. She and her crew of women, who bring such uncomplicated, chemical-free – not to mention delicious – sustenance to our table. 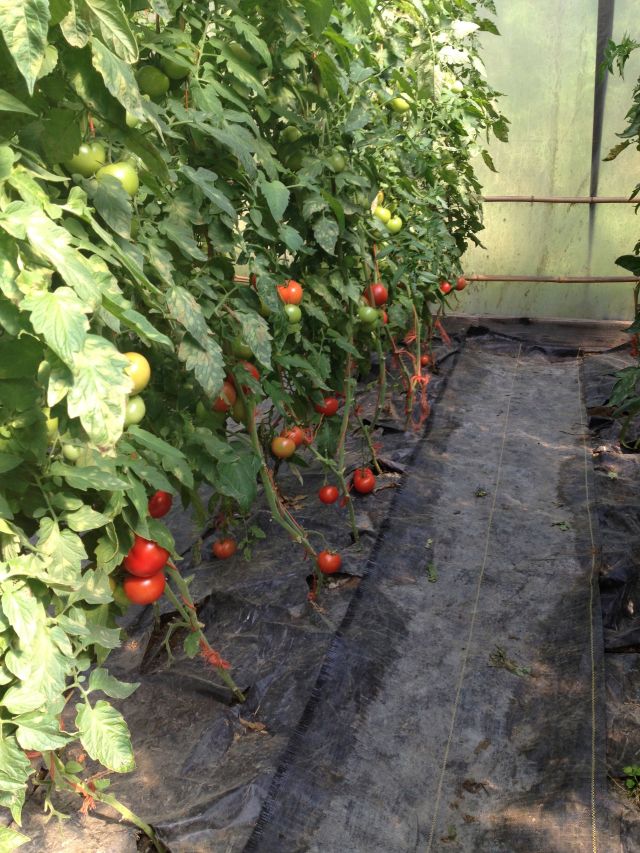 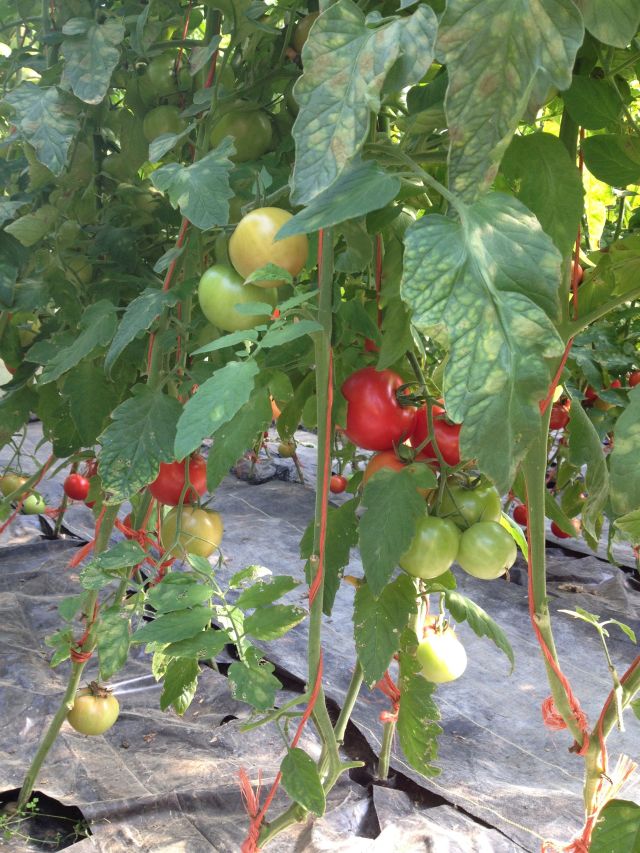 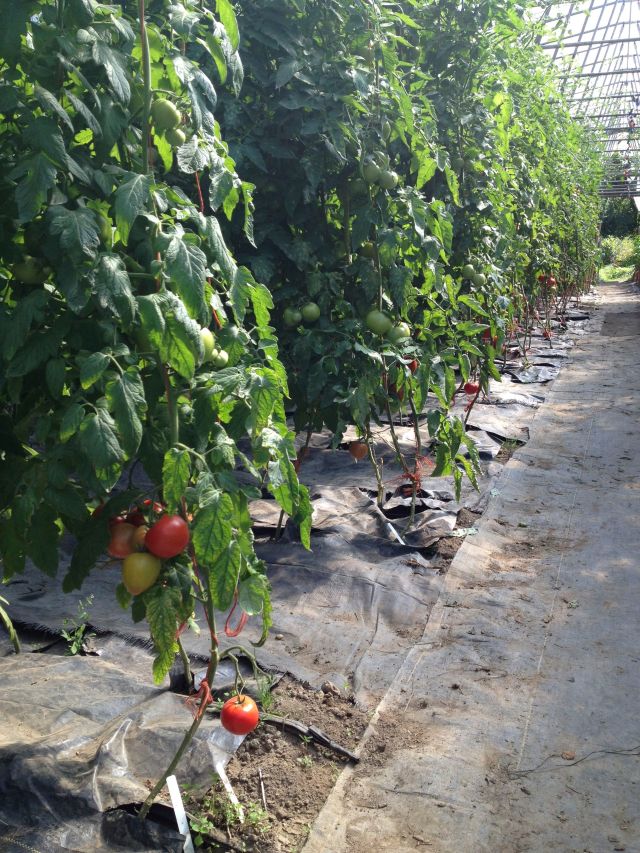 I’m still lost in that gentle musky smell that comes from tomatoes on the vine when I step forward and get an incredible hit of tangy fresh peppers. I look down to see long, curly green fingers hiding in the leaves throughout the rest of the hoop house. The smell is so mouth-watering I want to stand there and browse, like a deer at an apple tree, but I know if I start, I might not stop. So instead I linger a moment, torturing my salivary glands, then head back out of the hoop house before my growling stomach interferes with the peaceful growing that’s going on here. 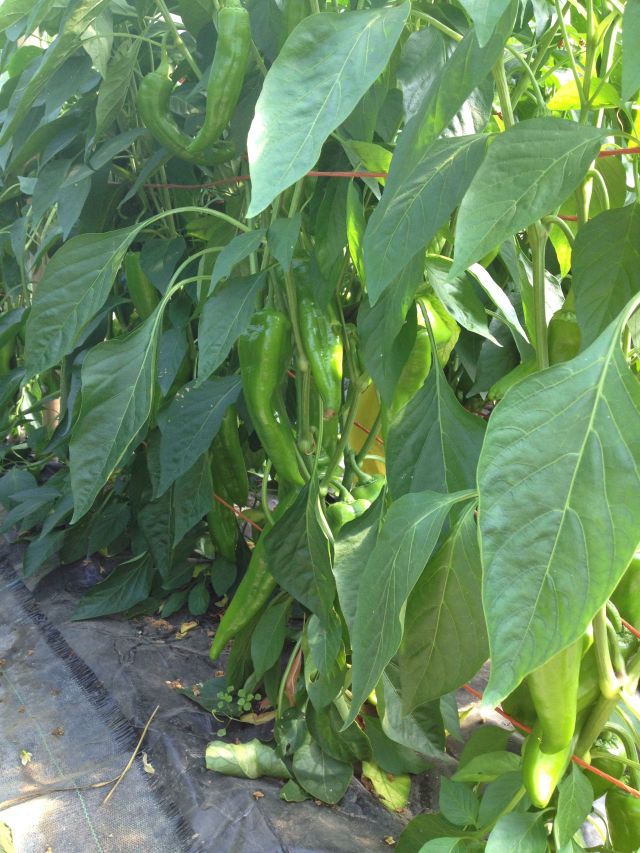 I get back into my car and decide I’ll catch Anne later to buy tomatoes and maybe some of those yummy smelling peppers. I do a three-point turn in the dirt and head back down the driveway, this time glimpsing a gap in the windbreak of green growth alongside the field I passed. Again my eyes widen at the sight of onions, planted in such a way that suggests someone really knew what they were doing. Why can’t I get my onions to look like that, I think. I can’t resist pulling over to snap a photo, and I’m glad I do because I get treated not only to the orderly onions, but also to the sight of crew members picking green beans and kale under the backdrop of Sauk Mountain. It takes a knowledge, I think. 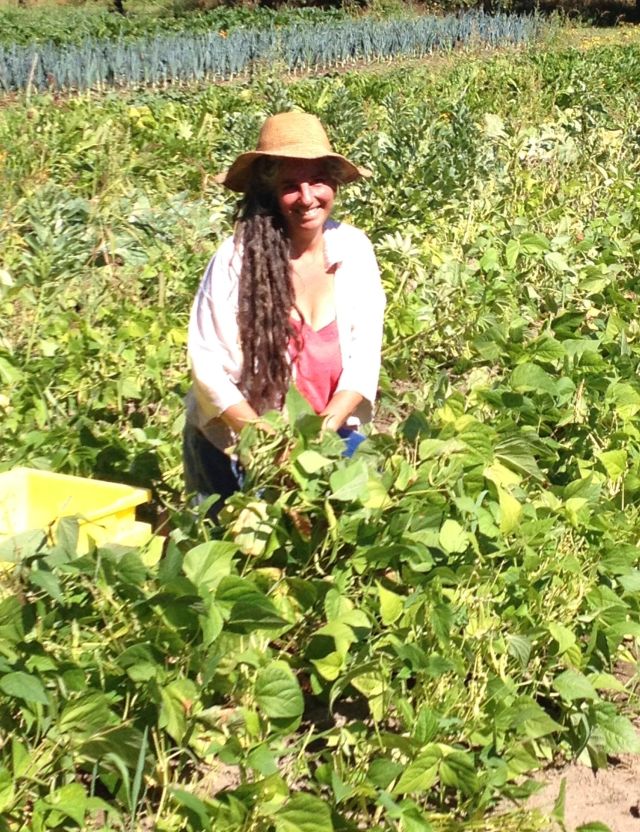 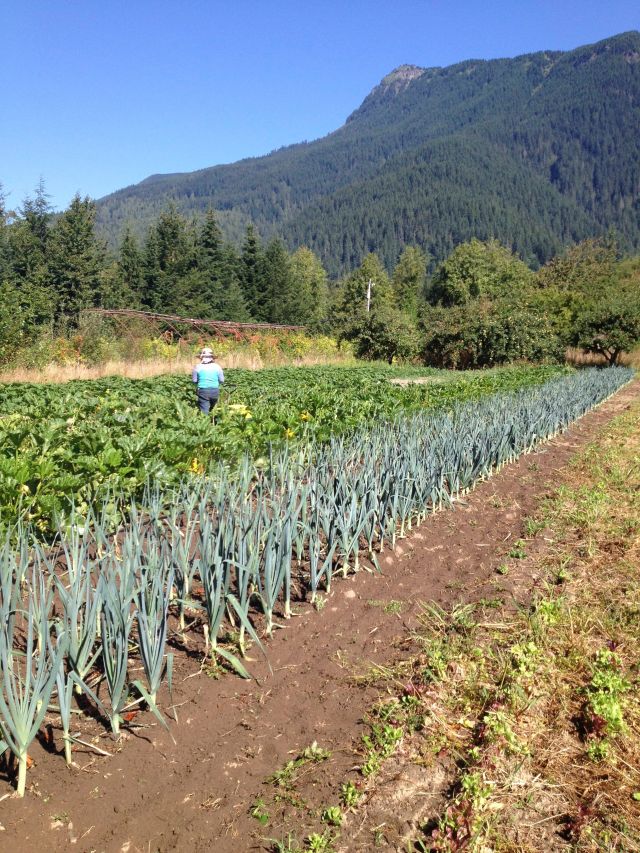 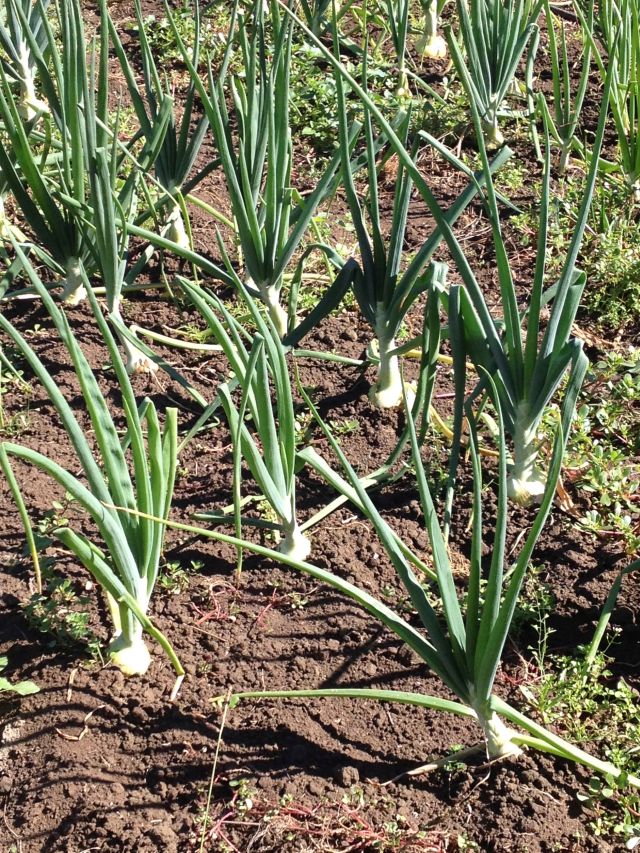 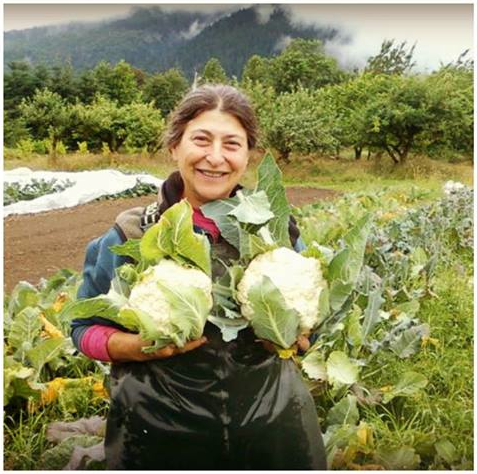 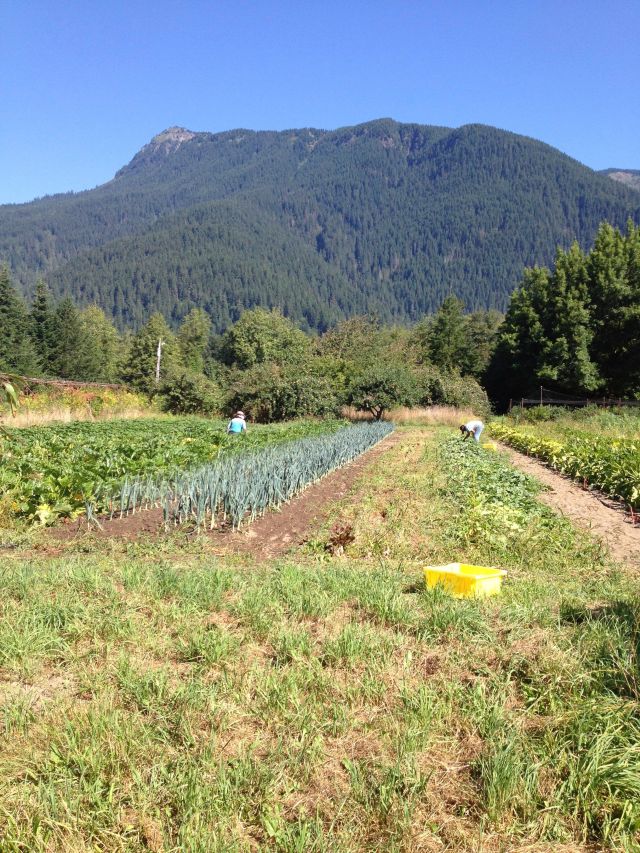 Under the backdrop of Sauk Mountain

And in case you didn’t catch the links in the text, here they are again for more information about Anne Schwartz and Blue Heron Farm:
http://tilthproducers.org/author/BlueHeron/