We often give people the tour when they come to visit our pottery shop, which includes seeing the studio where the pots are made and the kiln where the pots are fired. And often, if there are children with the adults (and sometimes just for the adults, because they ask) the tour ends at our chicken coop. Well, my chicken coop, my husband tells me, because he doesn’t consider the chickens community property. Although he built a lovely coop for them to live in. But still, apparently I have sole custody.

Which is fine because I think my chickens are wonderful. I wanted chickens because I’m partial to fresh eggs and when I found myself living on five acres with an existing coop, sans chickens, the connection was obvious. But aside from the incredible eggs my hens lay, they have also taught me a lot about love. Once I was down at the shop, about 150 feet from the coop, and heard the high pitched cheeping of a baby bird. One of my hens had recently hatched some eggs and the cheeping made me wonder if something was amiss. I strode up the graveled path, past the garden, to see the mama hen inside the coop, frantically running a groove into the dirt floor. I wondered what was making her so nutsy and then I spotted the chick, outside in the long grass between the coop and the garden fence. The chick must have pushed its way through the chicken wire to the great outdoors only to discover mama wasn’t coming too. Couldn’t come too, because she was of a size that wouldn’t fit between the holes in the wire. So the chick peeped its fear and mama hen sped back and forth on the inside of the wire like a bat out of hell. Or should I say, like a chicken with its head cut off (ooff!). I managed to capture the tiny chick (and trust me, that’s not easy to do because they’re so fast!) and when I deposited it on the ground, next to its mother, I was very impressed to see her immediately sit on it, as if to say – that’ll stop you from wandering off!

I used to think that being likened to a “mother hen” was an insult but since I’ve had chickens I’ve realized it is one of the highest compliments you can receive. Because chickens are excellent mothers. I remember going into the coop once with a group of visitors that included a friend, who also happened to be a prosecuting attorney. We looked at the chickens in the outer range, strutting and pecking and chasing each other, then my friend wanted to look in the inner sanctum, where one of my hens was sitting a clutch of eggs. “How many does she have under her?” my friend asked.
“I don’t know,” I said. “Let me see.”
I slipped my hand under the hen and she ‘bwauk, bwauk, bwauked’ softly at me as I felt around for the eggs. “Six,” I said, having touched at least that many.
“Can I try that?” this friend asked, fascinated.
I nodded – sure – but as she moved her hand towards the nest the hen ‘bwauk, bwauked’ much louder, fluffing out her wing feathers and reaching forward to stab her beak on the invading hand. My friend pulled back immediately but not because she was upset or hurt. She was impressed. “That hen definitely knows the difference between you and some stranger,” she said, as we moved back out towards the garden. “And I’m glad you showed me that.” Her face became more serious. “I’m prosecuting a case right now that involves some boys tying a chicken to a pick-up truck and dragging it down the street, then hanging it in a tree and setting fire to it and their lawyer keeps telling me – it’s just a chicken.”

Really? Because we sit higher on the food chain than these creatures that gives some people the right to think we can be cruel to them? Why? Why?! I hear that kind of thing and I think everybody should have a chicken coop, just so they can see reflections of love that might grow their hearts bigger. But of course, not everybody has five acres in the country or, for that matter, a spouse that is willing to build them a coop. So since this is the start of a new year and since last year was peppered with enough pain in the human world that too many of us found ourselves asking why – why? – I thought I’d share a moment of tenderness from my chicken coop that really made my heart sing.

One of my hens – the Chanticleer – hatched three chicks in late September and once she started moving around with them, I watched her dig a hole in the dirt floor and tuck the chicks back under her at night, to keep them warm, rather than roost on the perch with the other chickens. The main growing season was over in the garden so I let the chickens range outside the coop every day, to peck for bugs and run through the rototilled soil, and then in the evening, I’d go back up and close the door to keep them safe from potential predators. And of course, before I closed the door, I’d go inside and count that they were all back on the perch and then look down at the mother hen. Sometimes I’d talk to her, asking her if all the chicks were back inside with her, especially if I could only see two tiny beaks peeking out from under her. Invariably as I chatted the third one would squirt out from the other side of her and cheep at me as if to say, “Yeah, I’m here.”

The days got shorter as fall progressed and the chicks went from fluffy balls of yellow to more pint-size birds with sleek black feathers, not at all the coloring of the Chanticleer but more like the Black Orpingtons, who I noticed backstopped the Chanticleer every time she needed help in her mothering duties. As the chicks grew I kept expecting to find them on the perch at night, moving away from their mother, but still she dug a hole and tucked them underneath her. Then one night I went into the coop and they had moved up to the perch but instead of sitting independently from the mother hen, she was sitting over them, her wings stretched out to cover them all and keep them warm. 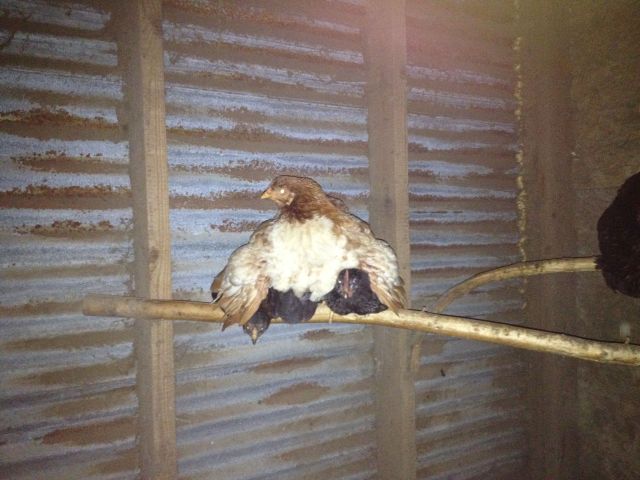 Now if that’s not a moment of love, I don’t know what is. Happy New Year.