When I met my husband he had just put the upper floor on the house he was building and I didn’t have idea what it would look like. It was basically a box with half-walls, two floors and some smooth skinned, big diameter logs that were going to hold up a roof at some point. 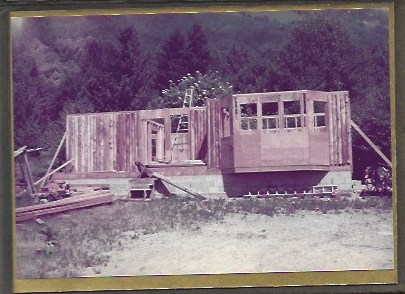 I was living in New York when he put the roof on and when I came out to visit the next summer I was immediately enchanted. The roof was all peaks and valleys, covered in naturally wavy, thick-bottomed cedar shakes as inviting and organic looking as shaved chocolate on an ice-cream cone. The angular lines made nooks and crannies of the skyline and upper floor windows, playing peekaboo with my imagination and transforming the structure from a shelter into something out of a fairytale.

Not only did my husband hand split those first roof shakes he also climbed up into the high heights of the house and nailed them onto the skip sheeting.

He doesn’t prefer to be that far up in the air but he was too broke at the time to afford a roofer or even the shake felt that should have gone between the cedar and the skip sheeting so he had to rely on his own moxie and the grace of good friends to put that roof on. Yet it held and protected what was underneath it from the elements for 35 years.

I’ve thought about that a lot since we replaced the roof earlier this summer. This time we hired Seth from Northwest Roofing and Siding to climb up there, rip off all the old shakes and replace them with new ones. This time the new ones were split by a band saw in a small, local shake mill and this time we were able to afford the shake felt to go under them. But even though it felt like we were getting an upgrade from that original shake roof I was impressed that the old, mossy, heavily weathered shakes still looked like new on the underside.

And they had done their job perfectly because despite the lack of shake felt, there was no rot in the skip sheeting under them. Just a few bats here and there who had been enjoying the dark, narrow, protected space for their slumber. It used to bother me to hear them scrabbling around up there, their wings softly thunking against the wood as they threaded their way to their preferred “hang outs” just before the sun made its entrance for the day. But time has mellowed me and before we had our roof replaced I remember hearing that sound above the dormer ceiling in my bedroom and shrugging at the thought that we shared our shelter with a little wildlife.

I was actually worried about the bats before Seth started re-roofing. I didn’t want them to come to any harm. But he tore the roof off in sections, starting with the left side of the gables, then the right and finally the center valley, and it seems that they rehomed themselves each time they were displaced, ending up back in the first section if the telltale thunking sounds (now muted by the shake felt) above my writing nook are any indication. I must admit I worried about Seth, too. Before he started our job I found myself lying awake at night, something I rarely do, hoping he wouldn’t lose his footing on our steeply pitched roof. But a couple of days before he was due to start he stopped by our house to double check he had everything he needed for the job and was sitting in his truck, gazing up at our roof, when he murmured, almost to himself, “Now I’m excited.” That’s all it took for me to be sure he was the one for the job. He wanted to be up there. 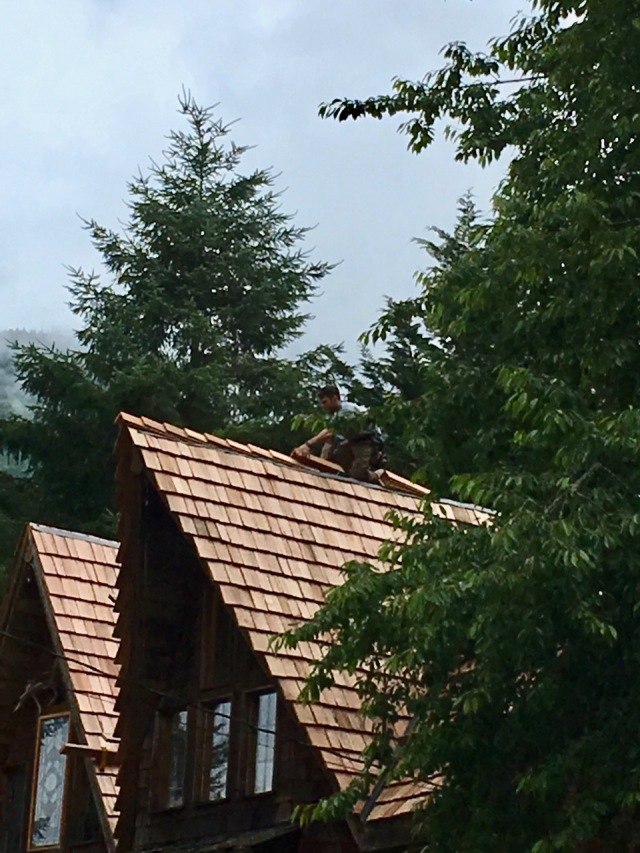 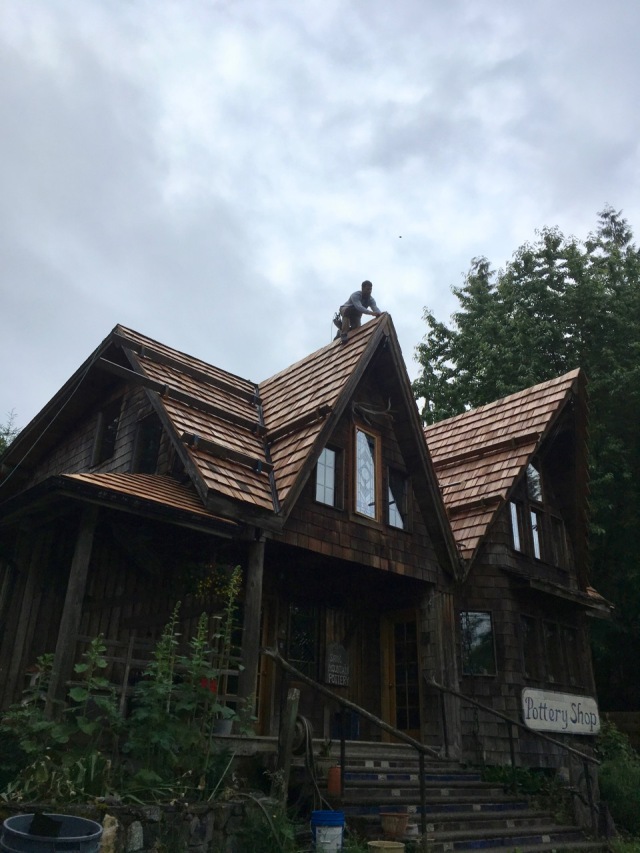 I listened to him above me as he worked, the creaking of nails being pry-barred out of tight holes reverberating in the peace of the mountain dell around us, and I thought about all the changes that have happened underneath that roof. How we took a simple framework and filled it slowly, determinedly, with finish trimmings, furniture and most-loved-mementoes until it had that kind of overstuffed but homey feel to it. How our family expanded and grew like yeasted pizza dough in the refrigerator except, unlike the dough, it didn’t pop the lid off the container holding it. That roof held. We squeezed more and more underneath it, more people, more love, more stuff, more celebrations of the kind that sometimes bubbled to the point that they could easily have blown the cork holding them in—but they didn’t. And yes, we had our share of pain and losses that made us hunker under that roof grateful for its comforting cloak of concealment.

About a dozen years ago I used a photo of our place for the profile picture on our pottery Facebook page and realized as I did so how much I’ve loved living in this little house. The roof is a big part of why. Now that I write about it I wonder whether this gingerbread style roof preceded the fairytale image it created or was it the other way around? Did someone back in history make a little house out of gingerbread with sloping gables simply because that’s how the cookies fit best together and everyone said—Yes! That’s where Hansel and Gretel lived. Or did that first baker look at the fantasy castles beginning to emerge in Europe and say, Hmmm. I like that roofline. I don’t know, I’m not an architect. But it is a curiosity to me. I asked my husband why he designed the roof the way he did and he said, “I don’t remember. I just know I wanted to build a house that looked like it grew out of the ground.”

Is that what makes people pull in off the highway to take photos of our house in all seasons? Because it looks like it belongs?

Again, I don’t know the answer to that question. What I do know is my husband had a dream of building a little roadside attraction where he could sell his pottery and not be dependent on galleries and gift shops to do it for him and the design he came up with draws people in. They see the house from the highway as they drive by, circle back to take a picture of it and then come in to see what the pottery shop holds. Of course some of them stop because they’re pottery aficionados and they see the sign announcing our business, but the house design with its pinnacled roof definitely has its own allure. So when Seth nailed up the last of the new, coppery gold shakes I spotted numerous newcomers standing first in our driveway, their phones out in front of them taking a snapshot of the house, and then I got to meet them in the shop.

And if I didn’t already know how the roof makes the house, a little art project I ordered as a gift for my husband confirmed it. It’s a clay house made by our new friend and sculptural potter, Aimee, to commemorate the “dome house” my husband built way back when as a pied-a-terre for his brother-from-another-mother, Patrick.

Aimee sent me photos of the clay sculpture in progress and I couldn’t quite see the fairy quality of it the way I could the original structure  . . . 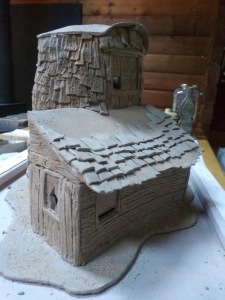 Then the magic was complete.

I’m not a visual artist so I can’t explain the creative appeal of a roof but I can imagine it’s rather like a baker taking a simple shortbread cookie and turning it into a work of art with just the right touches of sugar piping. As my friend Carolyn Ann Hale did with these birthday cookies she made for me. 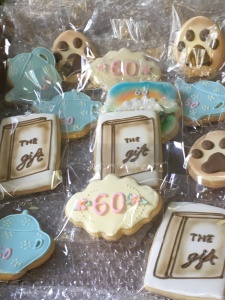 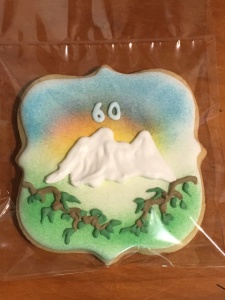 And even though I’m not a visual artist I did remember, as I was writing this post, that my preferred doodle at school when I was daydreaming in class (no, focusing, focusing!) was always a series of two-sided triangles – like this /\ – that sat in a line and had two-sided triangles on top of them narrowing to one single peak.

I probably shouldn’t admit that on a blog because I suspect it reveals something I’d rather not reveal about my psyche but it does make me think I ended up living in the right house. Wouldn’t you say?